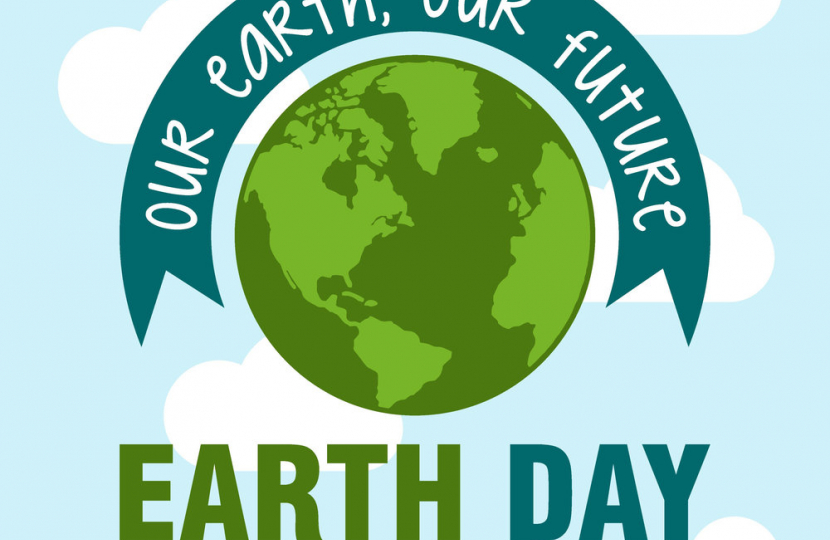 Conservatives locally and nationally are working hard to leave our environment in better shape than we found it. This is a huge challenge, requiring us all to play our part and take collective action but I am confident we can meet this challenge head on and deliver the changes we need to see. This is not only the right thing to do now but essential for future generations.

A great deal of work has and is being done in this space by Government. It’s an agenda I have been particularly involved with and I wanted to share some of the progress with you. While there have been great strides forward I recognise that there is much more to do and the urgency of going even further is vital.

Importantly, the Government has committed to leaving the environment in a better state than we found it and the 25 Year Environment Plan sets out a framework to enable this. It includes tackling the scourge of plastic, delivering cleaner air and water and crucially using the opportunity Brexit provides to develop our own bespoke agricultural and fisheries policies with a more sustainable focus.

• Banning plastic microbeads in personal care and cosmetic products; these include face scrubs, soaps, toothpaste and shower gels. Just one shower was sending 100,000 microbeads down the drain and into the ocean, causing serious harm to marine life).

• Ban on plastic straws, stirrers and cotton buds and a deposit return scheme for single-use plastics that is underway and subject to consultation.

• Introducing a 5p charge on single-use plastic bags: This has reduced their use by 85% - with each person on average now using 25 bags a year compared to 140 before the charge came into effect.

• Doubling the maximum fine for littering to £150: For the first time, local authorities can also use these littering penalties against vehicle owners if it can be proved litter was thrown from their car.

• Create a Northern Forest from Liverpool to Hull with the aim of planting 50 million trees over 25 years: Spanning more than 120 miles between the cities of Bradford, Leeds, Manchester and Liverpool, the proposed Northern Forest will help boost habitats for woodland birds and bats and protect iconic species such as the red squirrel.

• Protecting our bees and other pollinators by helping secure an EU-wide ban on neonicotinoids pesticides: The UK voted in favour of the proposals that will see a ban on outdoor use of three neonicotinoids - Clothianidin, Imidacloprid and Thiamethoxam.

• Creating 41 new Marine Conservation Zones around the UK: Safeguarding almost 12,000 square kilometres of marine habitats and marking the most significant expansion of the UK’s ‘Blue Belt’ of protected areas to date.

• Internationally protecting marine habitats with a Blue Belt to protect an area the size of India, including recently protecting 4m sq. kms of pristine waters around Ascension Island.

It is clear that tackling climate change is at the forefront of many people’s minds and I am pleased this is being taken extremely seriously by the government. Working with the Climate Change Committee, Government is taking advice on achieving net zero emissions across the economy. Many MPs have pushed for this with strong support from their constituencies.

• The UK has reduced greenhouse gas emissions by 25% since 2010, faster than any other G20 country.

• The UK was the first country in the world to commit to phase out unabated coal power by 2025.

• 2018 was the cleanest and greenest year with renewable resources supplying a third of our electricity, up from just over 6% in 2009.

As we exit the EU, there is an exciting opportunity to rethink our land use policy through the Agriculture Bill ensuring farmers are paid for the delivery of public goods. The Fisheries Bill will ensure we have a sustainable fishing industry post-Brexit.

In a game-changing moment, demonstrating this Government’s true commitment to the environment, the Chancellor announced a whole range of measures in the recent Spring Statement. Foremost is a new global review to assess the economic value of biodiversity globally so we know what action is needed to take to restore our precious environment which has suffered such a catastrophic decline in recent decades. This could do for the Environment what the Stern Report did for Climate Change. In addition, we will enhance environmental standards through the forthcoming Environment Bill and establish a world-leading, green governance body – the Office for Environmental Protection – to uphold environmental legislation.

Business, community and public bodies all have a role to play but so does each and everyone of us. Small changes in our daily routine can add up to significant benefits for our environment. Climate Vision, a local organisation, has produced ten pledges - actions we can all make to our lifestyles to reduce our environmental impact. You could join me and the Climate Vision Pledge Group: http://www.climatevision.co.uk/top-ten-pledges

Whilst many positive steps have been taken, I realise there is much more to do and the urgency of addressing this has certainly been stressed to me by many individuals and groups that I have met with.  Rest assured I understand this message which is so important for future generations. Climate Change has no boundaries and it is important that it is tackled worldwide.