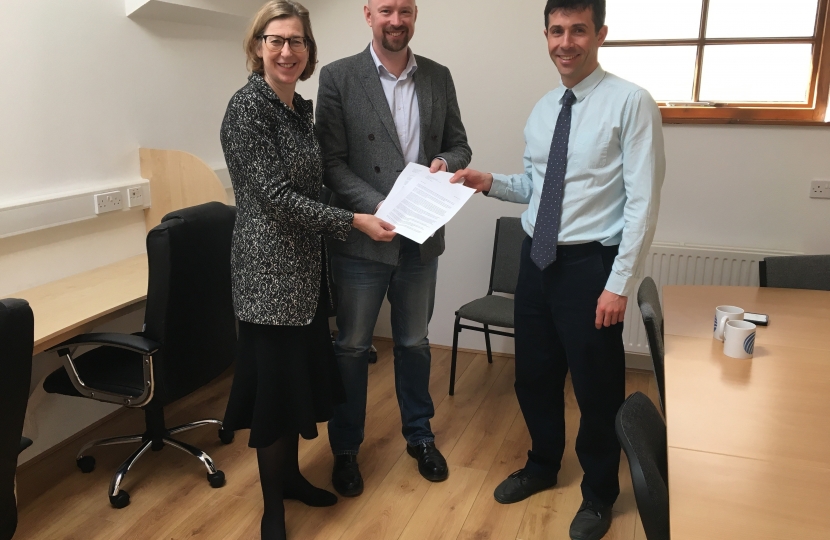 There is no doubt that tackling climate change is the greatest challenge we face but it is also an opportunity. I have been championing geothermal and marine renewable energy for sometime. We have abundant natural resources here that, if harnessed, would enable us to grow our economy sustainably. I met with Simply Blue Energy and WaveVenture in Penstraze recently to discuss their plans. I am a member of the All Parliamentary Group for Marine Energy & Tidal Lagoons & we are making the case for new, emerging technologies to be supported by the Government as part of our national energy and Clean Growth Strategy. Yesterday we discussed those plans that I will be taking them up with the Climate Change & Energy Minister next week. Below is the text of a letter I have signed.

On behalf of the APPG for Marine Energy and Tidal Lagoons and the 63 MPs who’ve signed below, I write to seek your support for the UK’s innovative wave and tidal stream technologies through the inclusion of a policy framework for the sector in the Government’s Energy White Paper.

The industry presents a real economic opportunity for the UK. Last year’s study and report by the Offshore Renewable Energy Catapult estimates that the tidal stream industry could generate a net cumulative benefit to the UK of £1.4bn, including considerable exports and support 4,000 jobs by 2030 and more thereafter as the technology is rolled out globally. While a less mature technology than tidal stream, wave energy could add a net positive contribution to the UK economy of £4bn and support 8,100 jobs by 2040. Most of the economic benefit is expected to be created in coastal areas which need economic regeneration.

Importantly, the ORE Catapult, in line with your Clean Growth Strategy requirements, has explored the potential for cost-reduction in the sector, and found that, in tidal stream, the industry can confidently reduce their costs of producing power in line with other major forms of low-carbon generation, like nuclear, at 1GW of global deployment.

As the cost of marine energy falls, the industry will be increasingly competitive in already established markets. Through an illustrative sample of 43 wind and marine companies, RenewableUK’s ‘Export Nation’ report found that the UK is exporting tidal energy to 14 countries and wave power to 11 countries. A joint report by the Highland and Islands Enterprise, Regen South West and Marine Energy Pembrokeshire estimated that the global market for marine renewables could grow to £76bn by 2050.

The UK already faces competition from the global market for the investment, expertise and intellectual property. Many countries with good marine resources are now supporting their domestic industry – including Canada, the USA and China.

The Government’s upcoming Energy White Paper provides the perfect opportunity for the Government to make sure that the UK is at the forefront of the development of wave and tidal stream renewables and maximises the economic benefits of doing so.

Success in other low carbon sectors shows that the best way to bring down costs is by deploying technology, learning lessons and continuing to innovate. As currently set up, the Contracts for Difference (CfD) auctions are not a mechanism that will support marine renewables – or any new renewable technology – as they seek to secure the early-stage investment in smaller-scale projects that will drive technology down the cost-curve to full commercial competitiveness.

However, the CfD mechanism could be reformed to include a restricted, but competitive, pool of allocated funding for marine technologies. Furthermore, the industry has put forward an innovative new policy proposal which would support early-stage investment in the diverse range of smaller-scale projects. Under an Innovation Power Purchase Agreement, a corporation would agree to pay above the market price – at a level set by Government – for the energy generated by a wave and tidal stream project. Those additional costs would then be reclaimable by the corporate as a tax rebate through the normal tax return process. The central benefits of this system are that is uses tax incentives rather than consumer-funded subsidies for the early stages of technology development. So, taxpayers would not pay for this through their energy bills.

As supporters of marine energy, can I encourage your Department to build on your meeting with the Marine Energy Council on 4th Feb 2019, to consult with wave and tidal stream sector on their proposals, and ensure that a revenue support mechanism to deliver new projects is established in the Energy White Paper.